A Look into the Work of the Disarmament Committee ​ 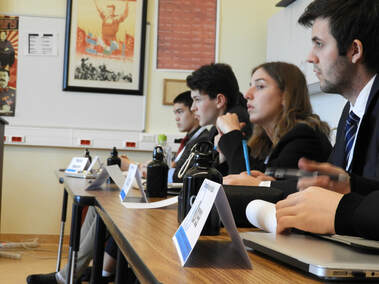 Delegates of the Disarmament Committee. Photo by: Aleks Adamkowski
The Disarmament Committee was mainly concerned with the control and reduction in the use of AI technology in warfare, paired with the mitigation of biological and chemical weapons.
The Chair opened the committee with several opening speeches from voting countries. Seated in alphabetical order, the opening topic of AI was central to the speeches from the Delegates. It was clear that everyone agreed that the pressing issue of AI needs to be taken into consideration, however some countries had different opinions on the strictness of such laws attributed to this issue.
The Delegation of Russia and the UAE both agreed that, “chemical weapons and AI are a new use for power,” and were quoted that, “the sky's the limit, the [AI] weaponization is a new concept that we want to become world leaders in. We want to change millions of lives for the future.”
They both made clear that they will be voting against restrictions.
The US was in clear support of AI technology, however they did state at the end of their opening speech that they believe that there should be restrictions on the use of AI.
Following the Opening Speeches, the committee was dismissed, and a guest speaker was brought in.
John Anderson, a Foreign Service Officer and Political Military Officer from the US Embassy gave a presentation for the Delegates to help them see a different perspective for the day. “Disarmament is the goal. OPCW and the CWC share success with this. Over 190 members are in it, however, Non-state actors and rogue nations are challenging these actions. How do we bring rogue states back into compliance? Communication is key.”
Questions were opened for Mr. Anderson and ideas from his speech were expanded upon by Delegates of varying nations.
Following this, Unmoderated Caucus was enacted, and the Delegates were free to speak freely in order to create resolutions for the committee.
During this time, several Delegates shared their take on the Conference with the Press Team.
The Chair both agreed that, “[they] hope for fruitful debate for the day.”
After great reluctance from the Delegates, the Press Team was able to squeeze out some responses on their take from the day. “It’s going well so far, nice opening guest speaker,” was the Delegate of Germany’s opinion. No other Delegates were willing to comment at the time.
The Delegates were released for lunch, and fruitful debate continued.