Child Soldiers, Speaking for the Voiceless ​ 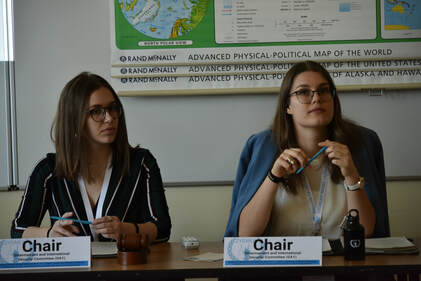 Mara Bondare and Evgenia G. Neftetzidou, the two Chairs of the Disarmament and International Security Committee. Photo by: Jan Stebnicki
Finally, an amendment being debated upon. The Delegate of Pakistan was in favor of an amendment to add onto clause one in the hope of clarifying the resolution as a whole. Voting ensued after, and the amendment was passed.
Another amendment was brought forward by the Delegation of India, adding onto the resolution that they believe, “rehabilitation centers must be vetted by representatives of the UN.”
A little bit of a laugh happened when the Delegate of Burkina Faso wanted clarification on the word, “resume,” it was brought to the chair’s attention that certain accents were not added to the clause, which proved to be confusing for certain delegates (which then was changed to résumé).
After some debate and amendments to the second degree, this amendment was voted on, and it was passed.
Finally, after some time was killed by another amendment being entertained, the resolution was voted on as a whole. Several speakers gave their opinion on the resolution and some interesting points were brought up.
“We do believe this resolution actually has some things to offer, we must do whatever we can- and that is accepting it, not rejecting it,” said the Delegate of Denmark.
This was countered by a speech from the Delegate of Egypt, ”This resolution as too many amendments to pass in order to enact an effective resolution. We should turn to a resolution that has more detail.” Despite this contradictory statement, another Delegate spoke against the amendment to the tune of Egypt, “there is something missing to this resolution, like child soldiers recruited to paramilitary forces… we urge you to vote against this resolution.”
The resolution was then voted on, and due to an appropriate majority, the resolution was passed. Following this was cookie break.