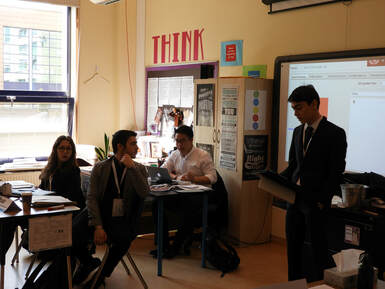 Delegate giving a speech. Photo by: Jack Kolenbrander
Youth Unemployment dominated the ECOSOC committee, Delegates were highly motivated to create a resolution that would mitigate the effects of youth unemployment globally. Opening speeches were given from several nations, mainly supporting the incentivization of youth workers.
No guest speakers were attending the session, so an unmoderated caucus was granted and resolutions were crafted.
The Delegates of ECOSOC were very open to questions from the Press Team during that time, and we were able to get the take of many attendees.
From the Delegation of France, they were, “hopeful that the cooperation between the MUN will bring the countries of all nations together. There’s lots of unmoderated caucus- people are formulating.”
The Delegation of the US had a very hot take. “Great that it’s [the committee] in a classroom.”
There was some tea to be spilt by certain nations, apparently there was looking to be
some joint alliance between China and the Delegation of Pakistan and Mexico. Along that, it was mentioned that throughout the committees today that it was many Delegates first conferences. Meaning that this should be a great opportunity for the participants to learn a lot from ZYGMUN.
On another note, several gossip boxes have been spotted in committees, so what will come of that is soon to be seen.
After a lunch recess, and a brief fire alarm, committees were brought back into session. A resolution was being brought forth, and eventually did pass. However, Press Team was not able to cover the entire section, we were able to capture one great quote from the Delegate of Egypt. “[on the topic of an amendment] accusing Germany of being a communist split state, we want market to be free without government control.” It seemed as if many Delegates wanted to speak on this, but Egypt was, “not open to any points of information.”
Another resolution was brought forth by the United States, and in their speech supporting their resolution they detailed that, “they were opened to all amendments by the Delegates.”
The Delegation of Mexico asked where the funding would come from for this resolution, and the Delegate of the US did not seem to know where the source for it would be, just stating that. “The UN would provide, money is not a problem.”
There was a brief blip in the session, as no delegates were willing to make any speeches in favor for the resolution, only ammening it. The Chair stated that, “We will not hesitate to call out random people to make speeches.”
After much deliberation, the resolution was passed. ​