Not A Face Mask for Acne ​ 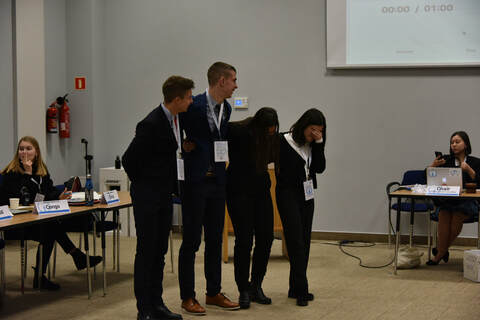 Delegates dancing for punishment. Photo by: Jack Kolenbrander
Day two of the formal conference began with Delegates shuffling in, tired but excited for another round of sessions. In the Environmental Committee, the first resolution from yesterday was still being debated upon, and at 9:00, it was evident that an amendment concerning child facemasks was imminent.
“It is impossible for many nations to reduce the coal industry… therefore increasing the awareness of this issue the citizens can be protected by these face masks.” the Delegation of India stated.
Following a few more speeches (and a spit between the DPRK and Spain), the vote was held on how to mitigate air pollution the best.
After some more amendments, the Delegate of Spain had enough, “it is sad that we are turning to facemasks to solve the problem. The practicality is not possible.”
A vote to strike this clause was in order, and the amendment was not passed.
One speaker from the Delegation of Mexico was recognized to speak against the resolution as a whole, “the resolution is completely biased to the submitters and does not reduce the use of fossil fuels. These clauses are not possible economically or practically.”
In lue of this, they suggested the use of air purifiers and not gas masks every month. The Delegate of the DPRK spoke in favor of the resolution. “[the resolution] It provides viable strategies and appropriate approaches to combat the problem at hand, this resolution addresses how the health of children can be aided immediately and effectively.”
The Delegation of Mexico, impassioned by their disdain for the resolution, spoke aggressively when prompted. However, thereafter they apologize and spoke more eloquently, “The resolution only mentions that high GDP countries can help the organizations, the countries do not like to support others.”
Voting procedure on the resolution followed thereafter, and to the chagrin of Spain, the resolution was passed. However, a motion to split the house was brought up by Spain, but the validity of it was not clear.