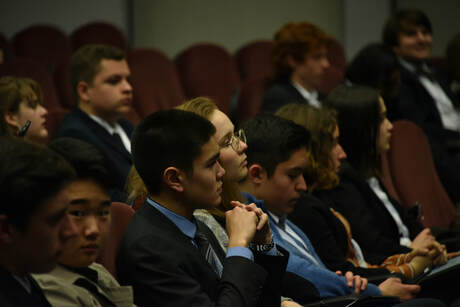 Delegates during the opening speeches. Photo by: Jan Stebnicki
April 4, 2019- the second conference of ZYGMUN started as the sun set over the ever-changing city of Warsaw. Over 100 delegates from five international schools gathered at the American School of Warsaw to begin their conference.
​​​Defne Onguc, Secretary-General of the conference began the Opening Ceremony with the theme of the conference, “fostering peace for future generations.”
Following the announcement of the theme, a brief welcoming video created by the Press Team was displayed to give a general feel of the upcoming conference, views of Warsaw and a few words from conference organizers were shared throughout. Following this, Mr. Zurfluh (Director of the American School of Warsaw) took to the podium to give a few remarks.
“Looking to the future you need to look back, there was a time in my life when computers did not exist… employ every faculty, because you are the future.”
The future was mention many times throughout the Opening Ceremony, and it is clear that the delegates will go forth into debates with this in mind. 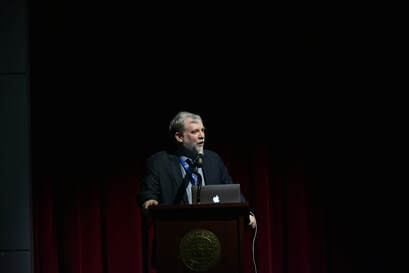 Mr. Zurfluh giving his speech. Photo by Jan Stebnicki
Renata Bem, from UNICEF, spoke about her experience with the organization. She gave a multitude of anecdotes during her presentation: clean water, saving child soldiers, kids growing up and finding their place- the works. After her presentation, questions were opened that allowed delegates to explore the presentation further. “The consequences of today will affect the future generations, the reality which we leave you will not be perfect.”
Following this, more opening remarks were presented by the Secretary-General and the Deputy Secretary-General for Administrative Affairs. The first were mainly concerned with the nature of news and cognition making us believe that the world is getting worse. However, that came with a silver lining in the form of Greta Thunberg, a youth seen as a symbol of hope for the coming generations, and a true example of the ripple effect.
“The world political spectrum was not designed for teenagers,” headed the next remark, and the Deputy Secretary-General made it clear that, “[it is] our duty to fix the generational divide, so that the youth can have beneficial influence to shape the the political atmosphere.”
As a closing to the first half of the ceremony, an original performance was given by Haiden Kolenbrander, which detailed the struggles of the rejection that migrants feel across the world. This message was given in the form of a song that was able to speak to the crowd in a way that sometimes a speech cannot. 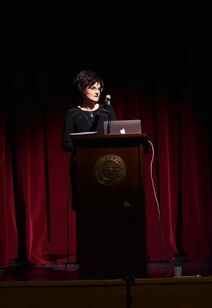 Renata Bem presenting UNICEF's mission. Photo by Jan Stebnicki
MUN is known to be an intellectually stimulating event for all participants, but as high school students all know, sometimes distractions can impede attention. This was seen from the Delegates of Mexico, South Africa, and India (on phones and sleeping during UNICEF presentation), as well as the Delegates of Spain and Yemen (also sleeping during UNICEF).
Up next was the opening speeches from the Ambassadors of each country. Each were given a set time of a minute to give an introduction to their intentions for the conference. Some notable speeches were from China, Cuba, and Indonesia.
The Ambassador of China made a point of mentioning aspirations to foster foreign relationships, and respect for each country’s sovereignty, all with a cheeky smile as they yielded the floor back to the secretariat. The Ambassador of Cuba spoke with eloquence, supporting struggling nations in dire need of aid- and finished with a smooth British, “thank you madam president.”
Of course, the Ambassador of Indonesia was hard to forget as at first they appeared distracted with different thoughts on their mind; missing the podium and reading the wrong section of their speech. However, they were able to prove themselves worthy of ZYGMUN as they spoke passionately about issues facing their country, even rebelliously throwing in some Indonesian at the end.
The ZYGMUN Conference is looking to become home of many fruitful debates in the upcoming days, and on behalf of the Press Team, we would like to thank you for letting us keep the Delegates informed throughout the conference. ​​